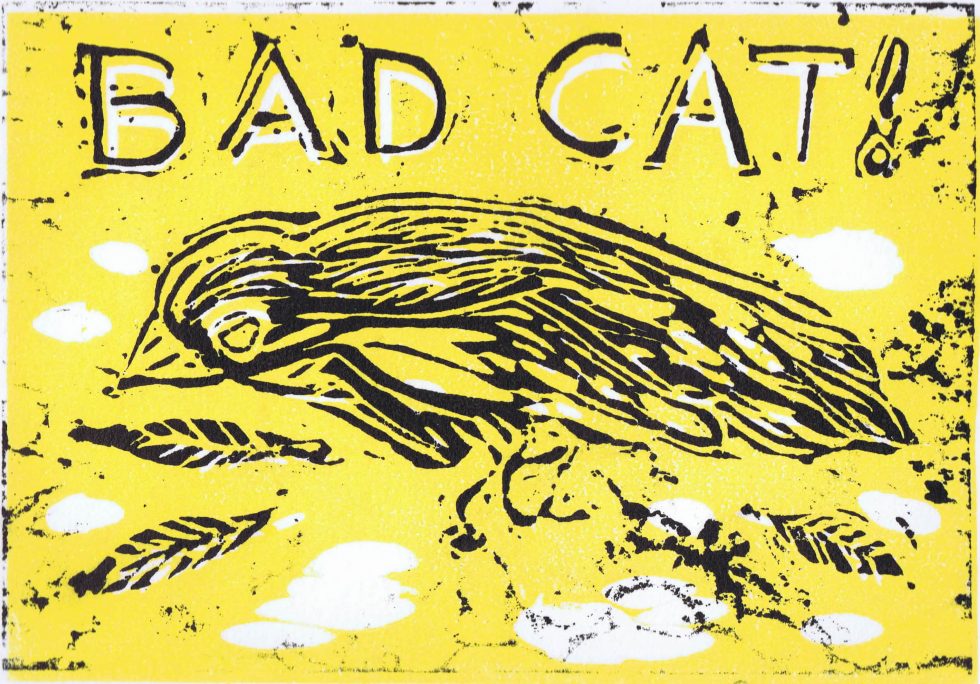 Bad Cat is a reductive relief print, 5 X 7 inches, in two colours. The image of a dead bird with lettering spelling “Bad Cat” was inspired by finding a dead sparrow on my back patio. My cat, Dora, is a beautiful animal who I love dearly but I hate that she kills birds. I know hunting is instinctive since she would never eat her prey and is not even amenable to eating wet cat food. Dora is not alone in her ways, at least in terms of killing birds.

Conservationists estimate that each year domestic and feral cats kill over 200 million birds in Canada and over a billion in the United States. Predation would be expected by feral cats who are seeking their next meal but the largest and growing threat is from the house cat population, instinctually hunting rather than seeking entertainment or food. According to the respective veterinary associations, approximately 37% of households in both the US and Canada have at least one cat.

The American Bird Conservancy says that predation by domestic cats is the number one direct, human-caused threat to birds in the United States and Canada and has already contributed to the extinction of 33 species with another 87 bird species are on the endangered species list. As more households are experiencing the joys of cat custodianship, the threat to the bird population increases, especially when other factors like climate change, pollution and poisoning of food sources by pesticides are considered.

We love having birds in our backyard and don’t want to contribute to this mass destruction of the local bird population. Experts urge cat owners to keep cats indoors but keeping Dora in the house would be cruel to her at 12 years of age. So I keep close watch and scold bad behaviour.

Cat lovers can really be nature lovers? I hope this image will remind other cat custodians of their wider responsibilities to other animals in the natural world.