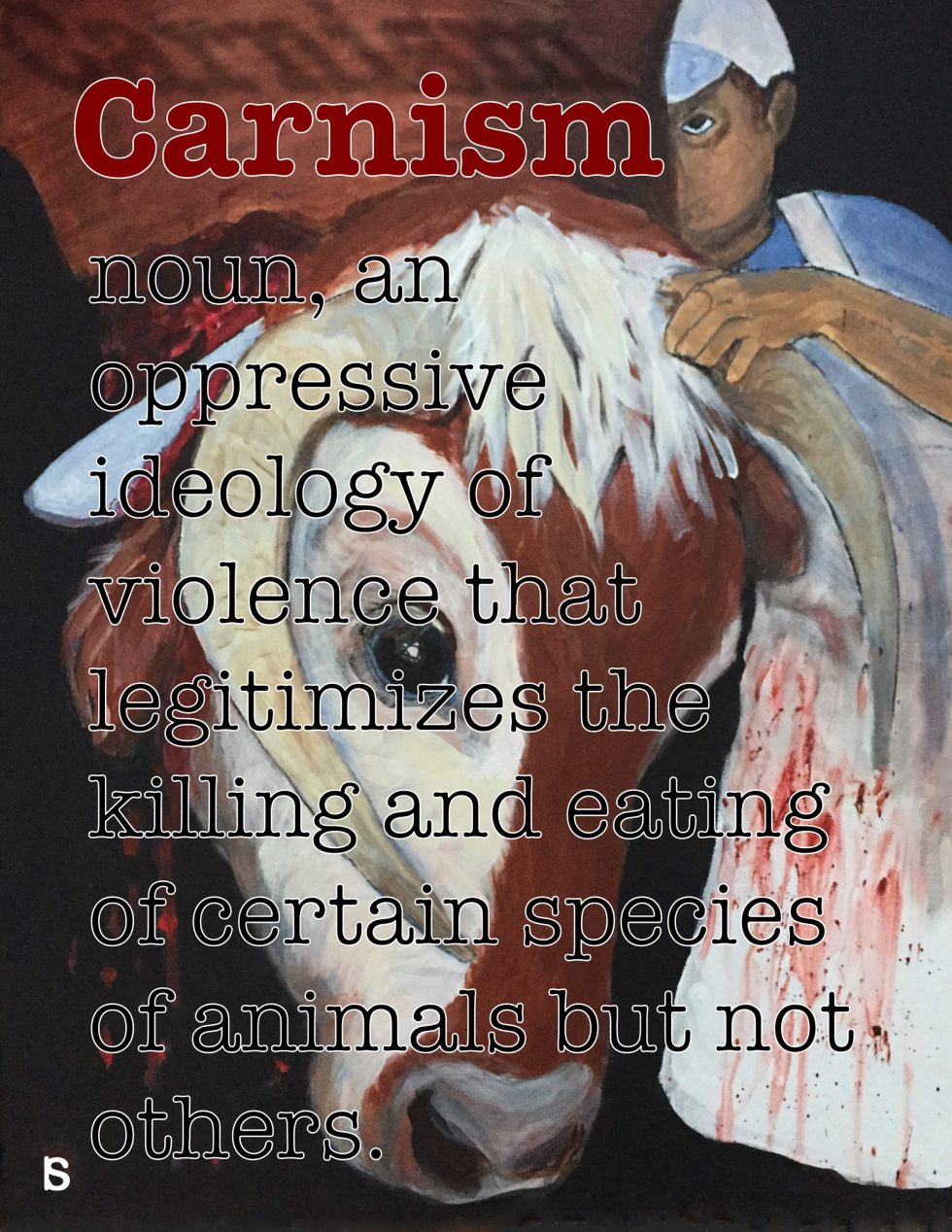 Most North Americans believe that eating meat is part of a healthy diet. Until last year, I too consumed meat, albeit “humane” or “ethically” raised. My art practice has focused on farm animal advocacy for many years, particularly against factory farming. Most people, even the coldest of hearts, would be shaken by any video of what goes on in concentrated animal feeding operations (CAFOs, another name for factory farms), or in transport or at slaughter facilities where living animals are turned into meat. In June of last year I decided enough was enough. I could no longer call myself an animal lover and continue to be party to the death of any animal – no matter how ethical or humane it was purported to be. I went vegan and I felt at home in the world. The decision was prompted by Dr. Melanie Joy’s work on carnism in the form of her TEDx presentation and her book Why We Love Dogs, Eat Pigs and Wear Cows: An Introduction to Carnism. Carnism, as she explains it, is an oppressive ideology of violence that legitimizes the killing and eating of certain species of animals but not others. Its antonym is veganism.

That we choose to continue to kill and eat animals is a set of behaviours and customs driven by an ideology, not a biological need. The fact that we have made companion animals members of our families while ignoring the torture, mutilation and slaughter of other select species equally as intelligent and sentient highlights the absurdity.

My work, Carnism – a Keyword for Change — was created using a photograph of my own painting entitled Eye and Mind with a definition of carnism digitally superinscribed. Its purpose is to put a name on the slaughter of 60 billion land animals killed for food every year. Like the animals we consume, we can survive and thrive on a plant-based diet.

The inspiration for my painting came while reading another book — Amy Fitzgerald’s Animals as Food: (Re)connecting Production, Processing, Consumption, and Impacts — a quote from an interview with a slaughterhouse worker describing how the pressure to increase the speed of production in U.S. (and Canadian?) slaughterhouses was leading to animals not being properly stunned or killed before being “disassembled.” The worker, identified as Moreno, said he kept cutting even though animals were clearly still conscious. “They blink. They make noises. … The head moves, the eyes are wide and looking around.”

According to Maurice Merleau-Ponty, the artist’s role is to project what is making itself visible within them. Although a canvas, unlike film, cannot capture movement per se, it can suggest a change of place, a transition, a glimpse of a living thing “unstably suspended between a before and an after” (Maurice Merleau-Ponty, “Eye and Mind,” 1961). I knew I had to paint the animal’s end of life experience so others would see.

I will end this post with a quote from Adrienne Rich, an American Feminist Poet:

Whatever is unnamed, undepicted in images…whatever is buried in the memory or collapse of meaning under an inadequate or lying language—this will become, not merely unspoken, but unspeakable.