Truth is illusive. Even when we are not listening to the bombast of politicians during elections, we realize that there are usually multiple truths, depending on one’s point of view. Dr. Harry Frank, a Princeton University Professor, in his 2005 book On Bullshit, examined the pervasiveness of misinformation in our society. Frank differentiates bullshit from truth in that bullshit does not require knowledge of the truth. Rather it incorporates truths, lies, misinformation into what is represented as reality. Because of its total disregard for truth and reality, Dr. Frank feels that bullshit is more dangerous than lies and that the widespread practice is eroding our ability to discern what is real. 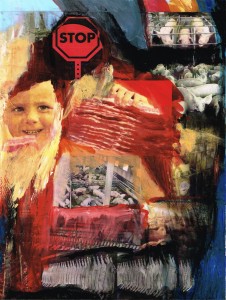 How much bullshit are we being fed? Many people have been convinced that factory farms and genetically modified food are necessary in order to feed the world’s growing population. This misinformation has been encouraged by many governments and the mega corporations that increasingly control the agribusiness.

Closer to home, what about Canada’s food supply? We are told that our food systems are safe and well  managed in the hands of Canada’s agribusiness giants like XL and Cargill, who together process 80% of Canada’s beef, overseen by diligent public servants at the Canadian Food Inspection Agency.  Over half a billion animals are slaughtered in Canada each year. We consumers want to believe that animals are humanely handled and protected by law, that factory farms are clean, modern and efficient places to live and work; that slaughter is humane and sanitary. We avoid learning about the horrors of modern agribusiness because if we saw it, or better still, heard it and smelled it, we would be revolted by it. To paraphrase Paul McCartney, if factory farms and slaughterhouses had glass walls, everyone would be vegetarian. (See the video Glass Walls for an eye-opening look at life and death of farm animals.)

I think we all have to take responsibility for seeking truth and knowledge and for the choices we make. I was chatting to one woman admiring at my “Pigs in a (Post) Modern World Series.” I told her that although the paintings were charming and mildly humorous, my message was serious and meant to draw attention to the cruelty of factory farms. She quickly said that she did not want to even think about where her meat came from because if she knew, she might have to change her behaviour. Hmmm…To parapharse Pogo, “I think I’ve seen the enemy and the enemy is us.”

As individuals we have power to take on even the biggest adversaries. We can exert that power to change what is wrong with AGRIBUSINESS and make live better for farm animals. We exert power with every eating and purchasing decision we make. Every time we opt in to Veggie Monday, buy organic or local food, demand healthy and yummy veggie and free-range options at restaurants, we are exerting our power. That is pretty easy. You have the power – use it.