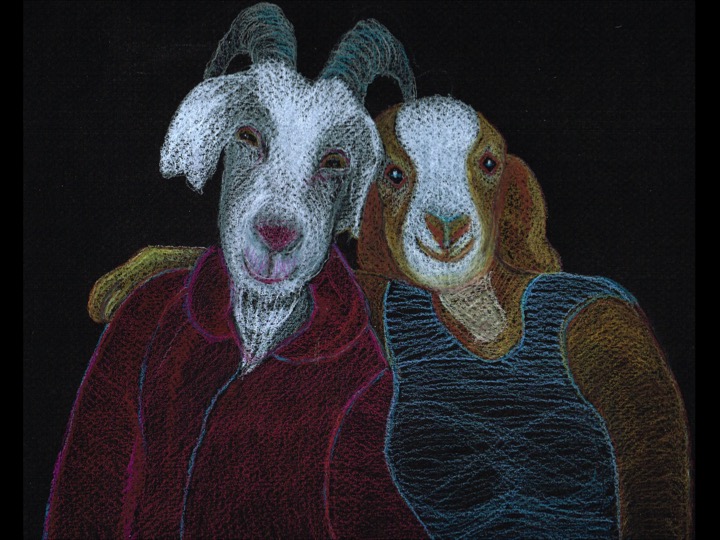 Animal Lovers is a playful series on domestic life with a serious message. Click here to see the Animal Lovers series. 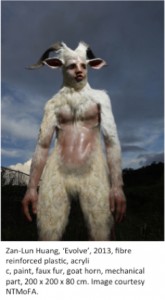 n a diverse variety of ways. These hybrids have played an important part in mythology and religion for thousands of years. In ancient Greece, Pan was the god of the wild, shepherds and flocks, nature of mountain wilds and rustic music, and companion of the nymphs with hindquarters, legs, and horns of a goat. In Roman religion and myth, Pan’s counterpart was Faunus, a nature god. Because of the association with fertility Pan and Faunus and lesser fauns and satyrs were often associated with eroticism. These creatures played important roles in art, literature and music through the ages.

Human-animal hybrids continue to be popular in storytelling and art today. Anthropomorphized animal characters in children’s literature and film and other scarier versions found in sci-fi and fantasy. As hybridity becomes closer to reality in scientific research and trans-humanist thought, it has taken some interesting turns in art. The Zan-Lun Huang, sculpture, Evolve, is one example of the continued interest in hybridity in contemporary art.

I decided to venture into animal-human hybridity in my art, not because of current trends in art but in response to seeing a horrifically sad video on the Toronto Cow Save Facebook page showing baby lambs that had been just born, snatched from their still bleeding mothers and hung by their feet for disposal. We forget this sad side of the dairy industry – be it dairy cows, goats or sheep – milk only comes from animals who have recently given birth. Where do the unwanted calves, lambs and baby goats go?  I was so overcome by the video clip I could only think of a new art series featuring sheep and goats so I launched  Animal Lovers. 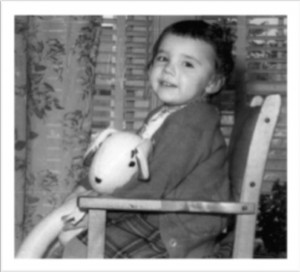 Animal Lovers is a series of pencil crayon drawings  on black paper.  My intent was to hybridize sheep and goats with humans and set them in human familial situations to emphasize that these domestic animals share our emotions and maternal instincts and desire to exercise their natural social behaviours.  For source material I used family photographs and images of domestic scenes and animals from the Internet. I found the work in coloured pencil calming. It gave me time to think. I remembered my innocent childhood when I thought milk came from farmers. Here I am at 2 1/2 years with my favourite toy, my Lammie.