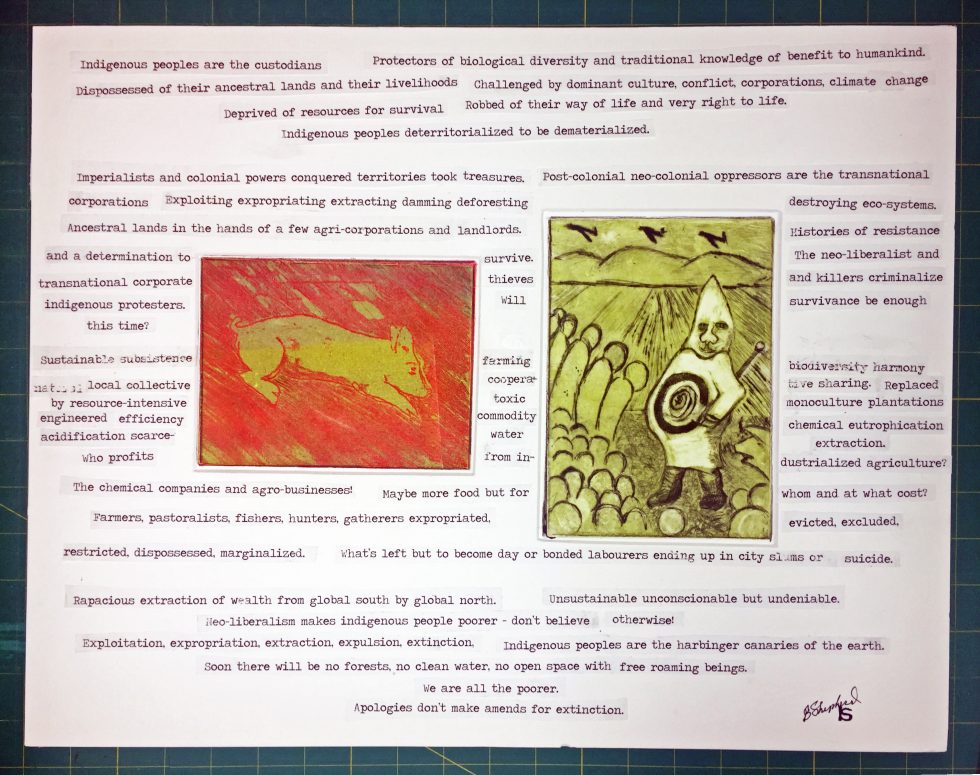 The Pig and the Overseer is about the loss of food security and self-direction for the 370 million people that identify as members of indigenous communities and nations in the world today (1).

I created this piece in for a group show at the RIA Artist Project Room January 2019. The theme of the show is DADA-Dinges!!! drawing inspiration from the Dadaist art movement. Emerging during the destruction of World War I, Dada sought to undermine the fundamental structures of a rational, ordered society, which they blamed for the unimaginable horrors of war. The absurd and bizarre certainly come to mind in today’s world too, as we move closer than ever to annihilation.

The work comprises two prints surrounded by collaged poetic text, resembling a Dadaist poem. At first I tried to follow Tristan Tzara’s instructions for making a Dadaist poem, which in short requires one to cut a newspaper article into its words, which are thrown in a paper bag, shook up and pulled out one at a time to be reassembled in that order. Certainly the results can be amuzingly absurd. But as I did my research into indigenous agriculture, I decided to create my own poem that hopefully makes sense! Click below to download the poem.

Pig and the Overseer PoemDownload

The overseer, modelled after Alfred Jarry’s noxious Ubu Roi, a character from his scatological play of the same name, represents the presence of the transnational corporations and world powers imposing Western technologized agricultural models of monoculture of water-intensive commodity crops requiring specialized seeds and constant application of fertilizers and toxic pesticides. I made this print a number of years ago when I was saddened to learn of the murders of indigenous protesters defending their traditional lands from a transnational corporation, sold from under them by their government.

The pig is my “poster child” for industrialized and highly technologized agriculture and is there as a reminder that the production of animal food products (meat, dairy, eggs and aquaculture) takes 83% of the world’s agricultural land while providing only 37% of protein and 18% of calories (2). The “Green Revolution” of the 1960s and the demands of globalization are now widely recognized as environmental and social failures and major contributors to climate change, acidification, eutrophication, other pollution, disease, diminishing fresh water supply, and loss of habitat, biodiversity and a wealth of indigenous cultural knowledge.