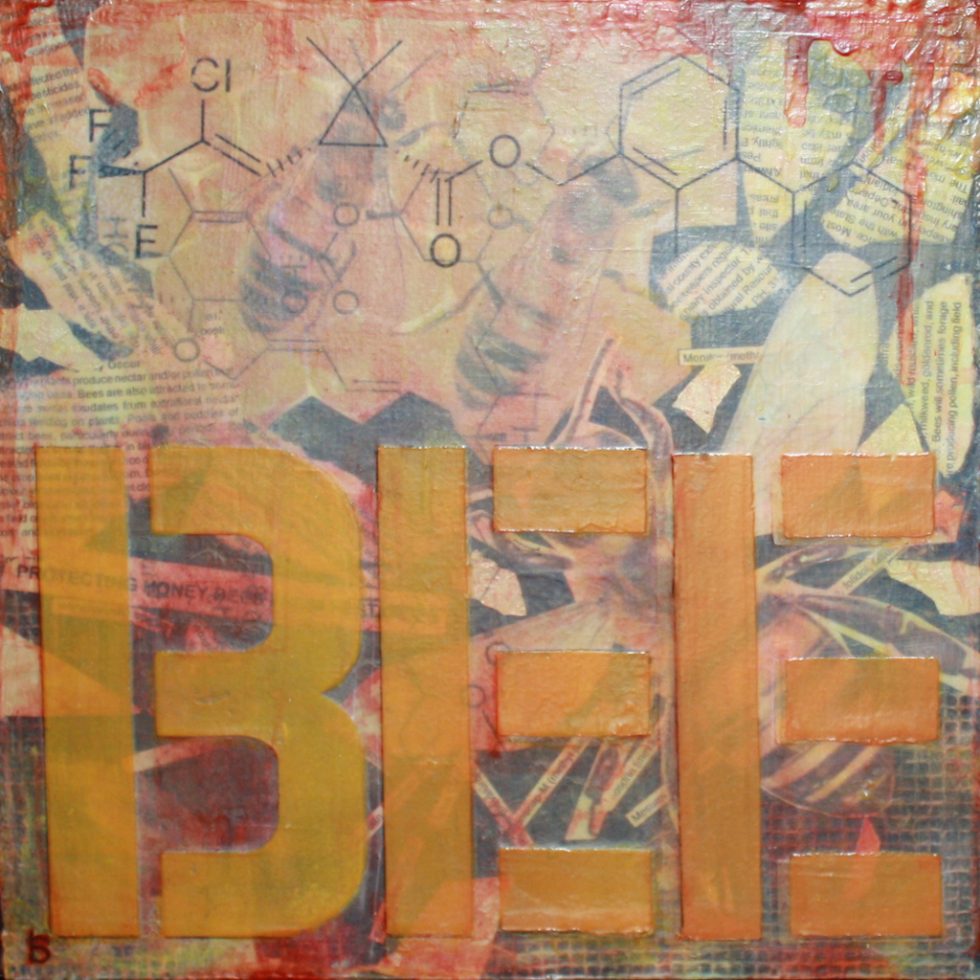 I created the Bee Armageddon Suite in 2014 but have never included them in a web post. Last weekend (Sunday, June 19, 2022) I participated in the Britannia Village Arts Crawl. In addition to some of my recent printwork and a make-your-own-art table, I displayed a few panels of posters from the RIALinks Passion to Action exhibition held at the Shenkman Arts Centre this spring (see Climate Change: Passion to Action on Instagram). I decided to display my Bee Armageddon Suite to build on the theme of activist art. There are four pieces: What is happening to the bees?, Bee Begone, Pink Parathione, and CCD: Colony Collapse Disorder. The medium is appropriate to the theme, being faux encaustic, that is simulated beeswax.

These pieces garnered quite a lot of interest from visitors making their way through the village due both to the relevance of the subject but also the technique I used – the faux encaustic effect created by building up countless layers of acrylic with imbedded image transfers and collaged materials. To get the cloudy effect of beeswax, I used a formula of two drops Golden interference blue and one drop of iridescent gold fine in roughly two ounces or 60 millilitres of gel matte. One has to be patient to allow the layers to dry.

My motivation for creating this series in 2014 was the rising controversy over the cause of death of so many honey bees with chemical companies strongly denying any responsibility. My updated research on the state of the industrialized honey bee and other pollinators follows.

“Pesticide” is a term for a group of chemicals designed to kill unwanted organisms such as weeds, insects, mites, and pathogens, like bacteria and fungus, that cause disease in horticultural and agricultural settings. Unfortunately, many agricultural pesticides can be toxic to bees and other insects essential for pollination of agricultural crops and for the functioning of ecosystems.

There are over 800 species of bees in Canada and the honey bee of the Apis genus is not one of them – it is an alien species brought by European immigrants along with their form of agriculture. Today mega honey bee colonies are managed by humans for honey production and increasingly for use as pollinators in the agri-business.

First observed in 2006-07, Colony Collapse Disorder (CCD) is the phenomenon that occurs when a large number worker bees disappear or die outside the hive leading to the eventual death of the colony. Controversies arose over what caused CCD — the presence of mites and disease, stress, changing weather patterns and pesticides were all implicated.

Over the years various chemical pesticides have been implicated:

While parathion and neoniconoids have been subject to increasing restrictions, gyphosate are not regulated and their use is widespread in the U.S. and Canada.

Today scientists agree that a multitude of factors – industrialized monoculture, the use of chemicals, fragmentation and loss of habitat, invasive species, disease, and climate change – all present a real and present danger for bees and other insect pollinators.

Both our native pollinators and industrialized honey bees are threatened by our human activities – especially those related to the production of our food. What action can you take to stop it?