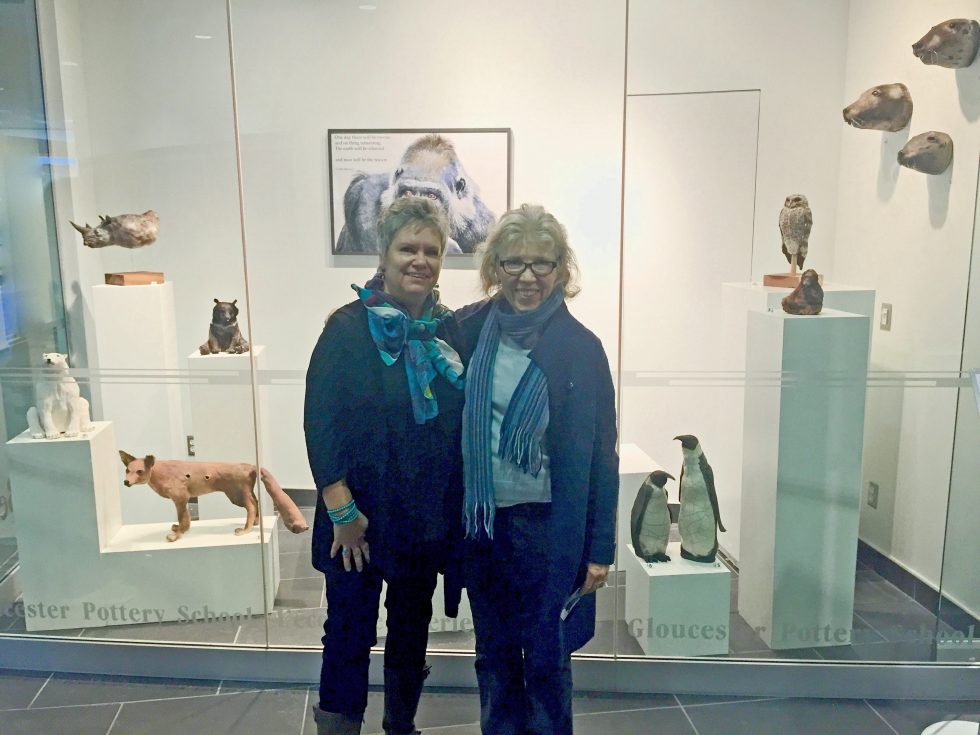 While working on the Animal in the Room series (2016-2017), I decided that adding a sculptural component might better convey a sense of three-dimensional presence of the animals. So I signed up for a clay sculpture course at the Nepean Visual Arts Centre and Collette Beardall was the instructor. I then followed her to Loam Pottery Studio for a session where I completed my series.

Before I knew that Colette was into animals herself, I found her very responsive to my particular interests—to make sculptures of my five main farmed species, including a sheep, pig, hen, cow and a goat.

Colette is not only a great instructor, but over the months I found out what a marvellous artist she is as well. The photo shows Colette and I at her solo exhibition – Endangered – held October 2016 at the Dust Evans Gallery at the Shenkman Centre. Collette writes: “In my work as a clay artist my subject matter has changed from enjoying rendering domestic creatures to feeling I have a voice to bring attention to the present condition of climate change and the effect this has on myriad species. The loss of species due to human culling for the benefit of fashion, ridiculous medical fairy tales and habitat annihilation, my work now focuses on highlighting these animals’ plight” (from Colette’s “Statement”). Please take a look at Collette’s work on her website.

Below are the five clay animal sculptures I featured in my Animal in the Room series, described in another post. I was pleased that my sculptures came out recognizable but unlike Colette’s beautiful work, mine do not express as much personality.